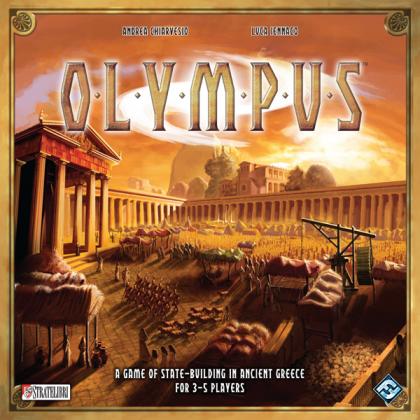 In the Ancient Greece, the poleis (city-states) thrived increasing their population and culture, occasionally waging war against each other, erecting buildings and celebrating ceremonies to get the favour of the deities abiding on Mount Olympus. The players will lead one of these city-states (like Athens, Sparta, Corinth, Thebes, Argos and others) expanding it and worshipping the various gods in order to become the hegemonic power of the Peloponnesus!

Olympus is a deterministic (i.e., non-random) strategy game, based on worker-placement, resource management and building an efficient engine to score victory points (VPs). It also features a few more aggressive options than the average game based on the same premises (but the savvy player knows how to defend against them, if he prefers to quietly develop his own position).

Each player leads a city-state that is defined by six values representing population, culture, military and productivity of the three resources (grain, venison and fish). During your turn, you send one of your three priests to worship one of the ten deities (Zeus, Hera, Demetra, Artemis, Poseidon, Athena, Aphrodite, Ares, Hephaestus or Apollo). Each opponent can now send one of his priests to celebrate the ceremony with you. After that, the deity grants his favor to whoever has sent a worshipper: the favor is larger for the leading priest (the one of the active player) and smaller for all the others (for example, Athena boosts culture by two points for the city of leading priest and by one point for the others; of course no boost is given to those who refused to send a priest to worship her). That deity cannot be chosen again in the current turn.

Since almost all deities are specialized in a certain field, the players must choose which ones they prefer to worship sooner (also guessing which ones may be of interest for the opponents and which ones are safer to skip as they will not be chosen until later) and when it is better to get a smaller benefit following the priest of another player rather than saving a priest to get a greater boon but in a field that may not interest them as much (sort of quality over quantity).

The resources your city produces (worshipping the correct deities) can be spent (worshipping other deities) to create buildings giving a variety of effects (and VPs), thus offering a lot of different strategic approaches to the game. Victory can be achieved with a plethora of buildings but also with very few ones. There are 45 different buildings: 33 can be built by anyone (even if someone else already did), while the other 12 are unique as only one copy of each can exist (introducing another element of contention between the players). You can also wage war to steal the resources of the other cities (if they were so foolish to keep their warehouses full and their military underdeveloped, it's just what they deserve) or invoke a terrible plague to decimate their population.

All the actions (development, production, building, war, scoring, etc.) are done by worshipping the proper deity (and some gods give you a choice like "do you develop your grain productivity – thus receiving more grain the next time you will produce it – or do you produce it now even if you won't get much?", adding crucial tactical decisions to the game).

When all the priests have been used, there's a brief upkeep to check some simple conditions (e.g., players with more than five unused resources must discard those in excess) and then a new turn begins (all priests return home and all deities can be worshipped again).

Being the first to reach the maximum value in a certain field (e.g. culture 10) gives you an award worth two VPs. When four of these awards are claimed, the game ends. Each player receives bonus points based on how developed his city is and the highest score wins.