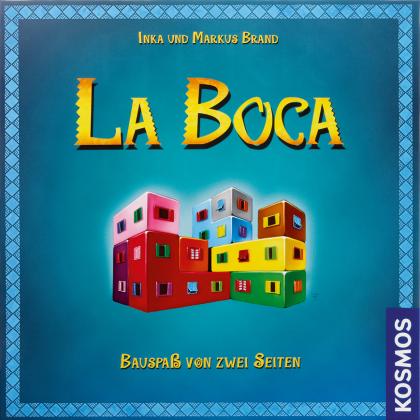 La Boca, the most famous neighborhood in the Argentinian capital of Buenos Aires, was populated by many Italian immigrants when first founded. The area is best known today for its eccentric skyline, with the houses having been built from scrapped fishing boats and the metal being colorfully painted to create a patchwork effect across the neighborhood.

Creating skylines of similar beauty and eccentricity is the goal of the construction teams that play La Boca. In shifting teams of two that sit across from one another, players try to create skylines on challenge cards – but the players can see the completed image only from their point of view, so they must consult with one another constantly to make sure each colored block ends up in the right location while racing against the timer. The faster the players complete their building, the more points they score. Then the next team takes a seat, breaks down the blocks, then begins building anew. Whoever has the most points after a certain number of rounds will stand atop La Boca and glory in the cheers of the Argentinian public!