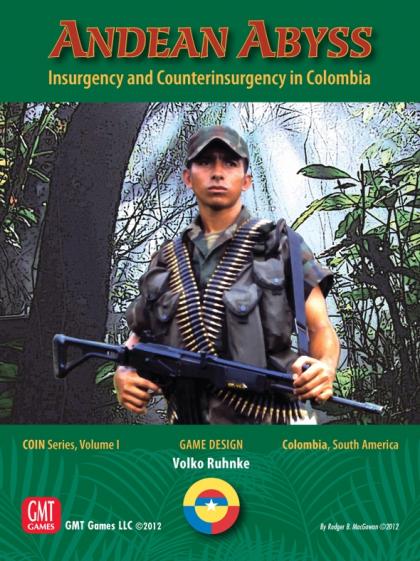 Colombia: Nation at the Edge of Abyss

Colombia in the 1990s hosted one of the world’s last Marxist guerrilla armies, brutal drug lords, and right-wing death squads and appeared close to failing as a state. A decade later, its Marxists had lost their top leaders and rural sanctuary, its big drug bosses were dead or in prison, and its paramilitaries were negotiating demobilization. The Government had extended its writ to most of the countryside, restored its popularity, and improved the economy and respect for human rights.

Andean Abyss takes 1 to 4 players into this multifaceted campaign for control of Colombia: guerrillas and police, kidnapping and drug war, military sweeps and terror. Each of four factions deploys distinct capabilities and tactics to influence Colombian affairs and achieve differing goals. Players place and maneuver 160 wooden pieces across a colorful map and exploit event cards that cannot be fully predicted. Accessible mechanics and components put the emphasis on game play, but Andean Abyss also provides an engrossing model of insurgency and counterinsurgency in Colombia—smoothly accounting for population control, lines of communication, terrain, intelligence, foreign aid, sanctuaries, and a host of other political, military, and economic factors.

A New Kind of Card-Assisted Wargame
From the award-winning designer of Wilderness War and Labyrinth, Andean Abyss features unique mechanics relating events and operations that guarantee difficult player decisions with each card flip. Most of the game’s 72 events are dual-use, representing alternative historical paths: players can choose either version of the event or from an array of operations and special faction activities. Every choice has implications for how the next card will be played. There is no hand management: the focus is on the map and on planning for the foreseeable—and the unforeseeable. Die rolls are only a small part of game: the key to victory is not luck but the ability to organize the most effective campaign.

Andean Abyss provides up to 4 players with contrasting roles and overlapping victory conditions for rich diplomatic interaction. For 2- or 3-player games, players can represent alliances of factions, or the game system can control non-player factions . Or a single player as the Colombian Government can take on the leftist FARC, the right-wing AUC, and the narco-trafficking cartels. The non-player insurgents will fight one another as well as the players, but too much power in the hands of any one of them will mean player defeat.

Andean Abyss presents a game system on modern insurgency readily adaptable to other conflicts, particularly those featuring the interaction of many sides (thus our new COunterINsurgency series). A rich and under-represented history of guerrilla warfare beckons. GMT COIN Series Volume II is Cuba Libre—Castro's Insurgency 1957-1958, Volume III is A Distant Plain—Insurgency in Afghanistan, and Volume IV is Fire in the Lake—Insurgency in Vietnam.