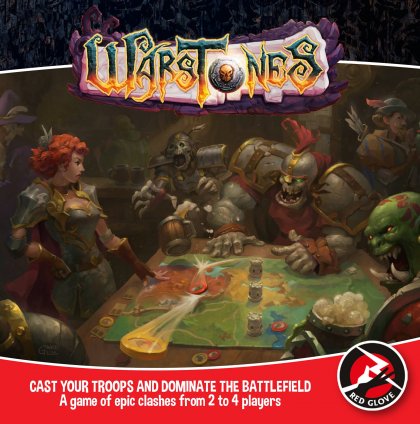 As gamers, many of us grew up building armies for their favorite wargame, and many hours were spent in epic pitched battles, straining our tactical and strategical skills. A lot has changed since then, but we believe we can keep the same magical feeling, providing a faster and more adrenaline-filled game experience.&#10;&#10;Warstones is a tactical army-building game, with a dexterity mechanism at its core. Choose your units, deploy them on the battlefield, then flick... eh... lead them! Control key areas to gain victory points, defeat enemy units or just push away the strongest. Dexterity is just one of the countless features of Warstones. Army building provides a lot of options and flexibility, so even if you don't believe in your flicking skills, don't worry! There are different kind of armies, and plenty of room for customization; you will find the army that works for you!&#10;&#10;&quot;Low profile, don't lose control!&quot; thought Bramhun while crossing an unknown tavern's door. Wildlife sought shelter from an unnatural cold in the southernmost regions of the kingdom that year. That's why many dwarven hunters like him found themselves lost in such hostile lands.&#10;&#10;&quot;Adapt to the situation, even if it means compromising with the enemy.&quot; Facing the long journey back to home would have put himself and that big load of skin in danger. Mokgul, an orc all covered in blood and tannin, suddenly turned his head and sized up the unwelcome guest, like many other inn patrons did. He closed the door. The curious barrel on his back couldn't be ignored. A complex, twisted rod made of wood and iron &mdash; a ridiculous dwarven hunting tool, indeed.&#10;&#10;Brahmun spoke to the orc behind an heavy wooden counter. &quot;Where's the tanner?&quot; The innkeeper pointed at a table by the fireplace with a nod. The light of the fire shone off Mokgul's face. On his table, there was a pelt with a map carved into it. You might have seen three rudimentary towers lying on it, and many rounded and flat stones, painted with stylized warriors, too.&#10;&#10;&quot;What do you want from me, dwarf?&quot; said Mokgul, while he was just staring at the table.&#10;&#10;&quot;I don't like doing business with you just as much as you don't like doing business with me, but I got a considerable amount of skins, precious as...gold.&quot;&#10;&#10;&quot;Sure, but I think I could smash your dwarven head and take your stuff instead.&quot;&#10;&#10;&quot;Be my guest, but I'm not that naive. They are hidden far away from here, mate. If I die, you won't find them, ever, and you will lose your share.&quot;&#10;&#10;Mokgul suddenly stood up, then raised his voice to get attention: &quot;And what if me and my mates force you to tell us where all your goods are, in exchange for the opportunity to see sunrise tomorrow and to walk out of here on your two feet?&quot;&#10;&#10;&quot;Fine! Here's the deal: I'm gonna give you all my goods and all my money, but you have to defeat me. On the other hand, if I win, you will pay me twice their value!&quot;&#10;&#10;After that statement everyone in the room gathered round the table yelling &quot;Warstones! Warstones!&quot; Bramhun came up to the table and collected a handful of painted stones. With a quick movement of his fingers he flicked a stone right behind one of the towers: The war of stones had just begun!&#10;&#10;