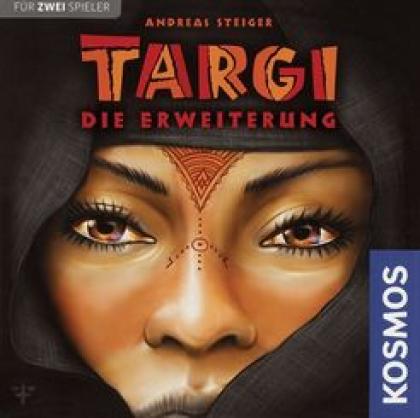 Descrizione tratta da Boardgamegeek:
The expansion of the tribe goes on in Targi: Die Erweiterung, an expansion for Targi. With water as a new element, the tribe has more flexibility in how it will extend itself. More specifically, in the game water functions like a joker, e.g., you can swap two water tokens for any one goods token. Many of the new tribe cards, which replace the set in the base game, allow players to choose to spend gold or water tokens, which can make it a little easier to build.

The Targia — a Tuareg woman — is a special pawn like the robber, but has a more positive effect for players. She starts in the opposite direction of the robber and moves each turn one edge card. When you place one of your Targi on the same card, you receive a favor: Either take a goods token of your choice or spend one good to reveal the top card from the draw pile and receive what it shows. Now a less attractive edge card might be more interesting because the Targia offers an additional reward.

Finally, shifting sand cards give the players rather strong immediate advantages when they place a Targi on them — but since these shifting sands are placed next to the central playing area, you lose an intersection on the central cards.