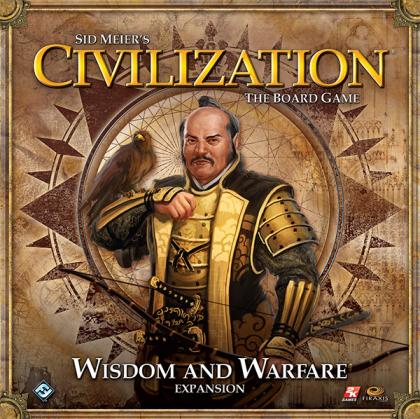 Sid Meier's Civilization: The Board Game – Wisdom and Warfare

In Sid Meier's Civilization: The Board Game - Wisdom and Warfare, six new civilizations join in the battle for supremacy: Aztecs, English, French, Japanese, Mongols, and Zulu – each with its own special powers. Along with the new civilizations comes new technologies, relics, wonders, and culture cards.

An alternative set of combat cards in which each unit now has separate Strength and Health values is provided for more tactical battles. With these new cards, a battle's winner is determined by comparing the total health minus the wounds of each side, plus any combat bonuses. Even if you can't completely kill a unit, damaging it will still have an effect on future turns.

Wisdom and Warfare also provides the rules for a new city action, "Starting a Building Program", which is a power-up for when that city produces something. This expansion also includes Social Policies that civilizations can adopt, such as "Rationalism" and "Organized Religion", and these policies offer options and provide bonuses for long-term planning.

Voti e commenti per Sid Meier's Civilization: The Board Game – Wisdom and Warfare