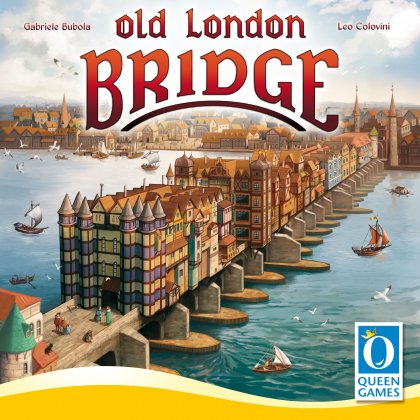 It's London in 1136, and the great wooden bridge across the mighty Thames has been consumed by fire. Soon the churchman Peter de Colechurch plans to construct a new, fortified bridge from stone upon which various buildings may be built over the years. Players are architects who are each responsible for one section of the (new) &quot;Old London Bridge.&quot;&#10;&#10;By playing character cards, you will contribute to the construction of the game's 3D bridge. Buildings must be built with house numbers in. Each house has a coat of arms that will grant special abilities, new character cards, and increase the player's income. The architect at the end of the game who has the most money is the winner.&#10;&#10;Old London Bridge is light-medium complexity game by designers Gabriele Bubola and Leo Colovini that plays in under an hour and features:&#10;&#10;&#10; A 3D cardboard bridge for increased atmosphere.&#10; A special bidding and building mechanism&#10; Variable victory conditions&#10;&#10;&#10;&mdash;description from the publisher&#10;&#10;