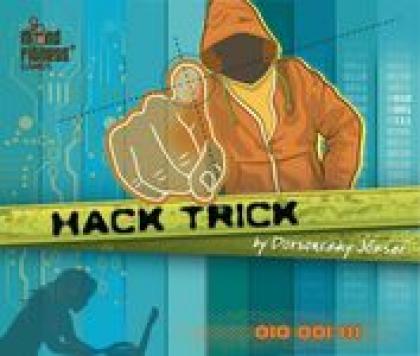 1:34 a.m. --- A fired bookkeeper’s message on Twitter: 3-SAME or SUM-15.
1:39 a.m. --- The information leaked out few minutes ago, and already the cartel chief's server has been attacked.
The stake is high, therefore the hackers not only have to break the firewall but to fight against each other ...

Hack Trick is a game of deduction and combinations where players generate numbers to finally obtain a valid password - a three-digit code with the same digits (ex. 222, 555) or with their sum being 15 (ex. 852, 159, 357). Each time a card is played, the player adds a number to the sequence, and marks the generated number - the sum of the last two numbers - on the keypad (places a marker on the key). Because the keypad is a magic square (the sum of each row, column or diagonal is 15) the object of the game is to line up three markers or place three on the same key.

Hack Trick gameplay is deceptively simple, but you’ll see, that it hides many combinations. In his turn, the player may ask the sum of the opponent’s hand, than play a card or draw. When he plays a card he may capture opponent markers, moreover, he may sacrifice a marker to force his opponent to play a card in the next turn, or contrarily, protect himself from being forced. Markers can be used in five different ways, but be careful, the player who runs out loses!

Finally, the winner will be the player who knows how to defend and attack the positions, when to gather information, when to use the doubles, when to start a forced series, but above all how to find the right balance between forming a strong hand and tend to the final goal on the board.