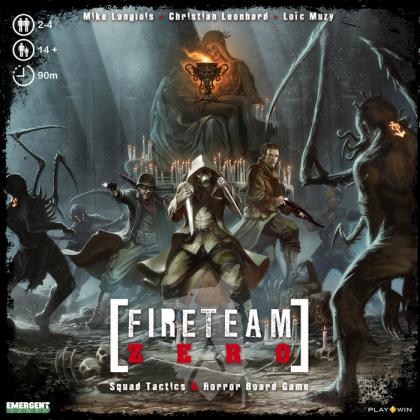 In 1942, four soldiers vanished from the training program of the newly formed First Ranger Battalion, their names stricken from the roster. Chosen for their unique skills, they would fight in secret against terrifying supernatural enemies and overwhelming odds. This is their story.&#10;&#10;Fireteam Zero is a cooperative game for up to four players who must cut a path through an endless swarm of deadly monsters in order to discover and defeat the ultimate evil behind them. Each player possesses a set of brutal combat skills that are represented by a deck of cards unique to that character. Play cards to devastate the creatures in your way, help your teammates survive the onslaught, or even reshape the tactical landscape with the proper application of explosive ordinance. The battle is fought across three maps of increasing difficulty, each one bringing more and tougher enemies than the last. Players must search for and complete mission objectives in order to progress and bring them one step closer to the final showdown.&#10;&#10;Aiding them are two NPC Specialists, one with an uncanny ability to sense the location and nature of the supernatural energy in the area and another with an encyclopedic knowledge of the arcane. Use the Specialists wisely or risk failure no matter how many monsters you defeat.&#10;&#10;Race against time as the creatures on the board become stronger and more cunning. The longer you take to complete your objectives, the more Monster Twist cards are revealed, each granting a new and terrible aspect to your enemy. In each set of missions you will face a different family of horrifying creatures, each with their own special abilities and twist cards.&#10;&#10;Players must not only fight for their lives, but at the same time they must make smart tactical choices with their teammates in order to make the best use of a limited resource, the cards in their hands. Each card not only represents an action that they can take, but also their health. Spending too many cards can leave you vulnerable, while spending too few can result in being overwhelmed. Clever players will rely on each other to succeed.&#10;&#10;Fireteam Zero is a story-rich board game of squad tactics and horror. Each map can be played separately in about 45 minutes or together to complete an entire Operation in about three hours.&#10;&#10;Expansions:&#10;&#10;1) The Africa Cycle:&#10;&#10;Go head to head against the Thornspawn in this expansion!&#10;&#10;New Miniatures! Receive the Thornspawn, an entire new monster family. Comes with 8 Scavengers, 3 Wooden Men, and Prime who is a massive 60mm tall boss figure.&#10;&#10;New Mechanic! Add Gear to your hero as you progress. Gear can be easily added to the core set and all other expansions as well.&#10;&#10;New Locations and Adventures! You'll encounter:&#10;&#10;An all new, 3 Act Operation: Sticks and Bones. Plus, these standalone missions:&#10;&#10;&#10; Lost and Found&#10; Clockwork &#10; Between the Bones of the Earth&#10;&#10;&#10;And you'll face these challenges using 4 new double-side map tiles, giving you 8 new map sectors with all new terrain to explore!&#10;&#10;2) The Europe Cycle:&#10;&#10;Face the Bloodless in the Old Country!&#10;&#10;New Miniatures! Receive the Bloodless, another entirely new monster family! Comes with 8 Spore Children, 3 Saprophyte Soldiers, and Black Tooth, a towering boss figure over 60mm tall!&#10;&#10;New Mechanic! Enhance your Specialists with all new powers! Each specialist now receives their own deck, unleashing fantastic new abilities. The Specialist decks have been designed to work seamlessly with the core set and all other expansions!&#10;&#10;New Locations and Adventures! An all new 3 Act Operation: The Dead of Winter. Plus, these standalone missions:&#10;&#10;&#10; Artifact Vault Bravo&#10; The Hunt&#10; Sacrifice of Honor&#10;&#10;&#10;Conquer your enemies on 4 new double-side map tiles, giving you 8 new map sectors with all new terrain!&#10;&#10;