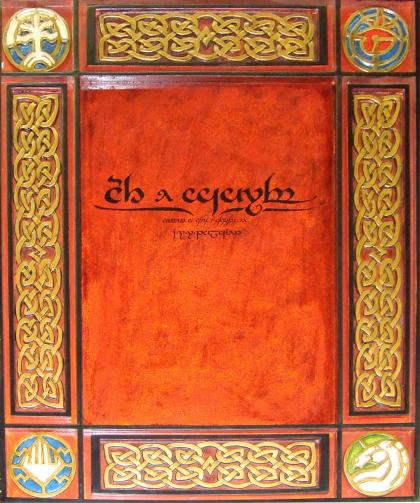 War of the Ring Collector's Edition

War of the Ring Collector's Edition is a strategic wargame in a fantasy setting where one player takes control of the Free Peoples, and the other player controls Shadow Armies. As with the standard version of this game, one can win a military victory, either as Sauron and the Shadow Armies if he conquers a certain number of Free People cities and strongholds, or with similar conditions when playing as Fellowship and Free People. The game may also be won by the Free People by completing the quest of the Ringbearer and trying to get secretly to Mount Doom to destroy the One Ring. Hidden movement prevents Sauron's awareness of the real intention of his enemies and keeps him looking across Middle Earth for the precious Ring. The Free People player must balance the need to protect the Ringbearer from harm, against the attempt to raise a proper defense against the armies of the Shadow, so that they do not overrun Middle Earth before the Ringbearer completes his quest.

Limited and different choices are offered each turn through the roll of action dice which dictate the type of actions may be performed. The choices range from personal character actions to political and military decisions through which to develop your winning strategies.

The War of the Ring Collector's Edition brings all that was in the base game and introduces factions, new characters and new events from the expansion, including Galadriel, the Balrog, the Ents, Dunlendings, Siege Towers, Catapults, Corsairs, and more. It is a complete game with updates to the original game rules and incorporates the expansion rules and cards to allow for new strategies to play out. This increases both the offensive options of the Shadow Forces and defensive options of the Free Peoples. This all-in-one version of the game is deeper, more comprehensive, and offers both more, and more difficult, choices of what path to pursue to victory, and where to spend one’s resources. The additional armies and characters of this version also enrich the theme and make it more true to the entire Tolkien saga of the Ring War.