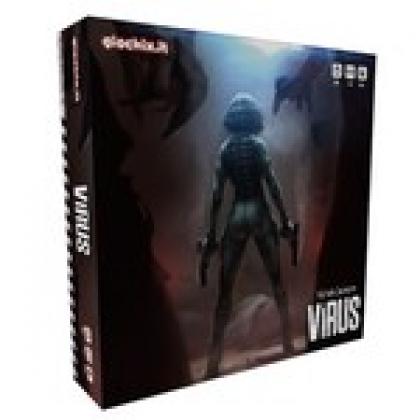 Descrizione tratta da Boardgamegeek:
A frightening virus, Virus Q, is spreading in the major cities of the planet. Infected people and animals change rapidly, becoming horrible bloodthirsty and almost unstoppable creatures. Our only hope is to find the zero patient and the place where everything originated. There, perhaps, we can find an antidote and return the hope to the dying humanity.

But not everyone agrees. There are those who want to take advantage of the chaos and terror in order to gain power and establish a new form of government, trying to maneuver and control the monsters generated by the virus. A cure would ruin their plans forever.

The virus was created in a secret military lab, in a space that's practically inaccessible. Inside, Virus Q spread for the first time, accidentally, maybe; the creatures that now inhabit the Lab are difficult even to imagine...

In the innovative lab crawler game Virus, players are the team that infiltrates the Lab looking for the antidote to Virus Q. They will collect the few and fragmentary bits of information scattered in the laboratory, avoiding or fighting the monsters that populate it.

The map generation and the movement/placement of monsters depends on the player actions with a semi-automatic mechanism controlling what takes place where. The fighting requires some dexterity elements as well as players must plan their tactics by combining their shooting power with available movement, achieving successes by rolling cubes.

In sum, you can play Virus cooperatively, semi-cooperatively or competitively. The "infiltrator" option makes the game even more exciting and unpredictable!