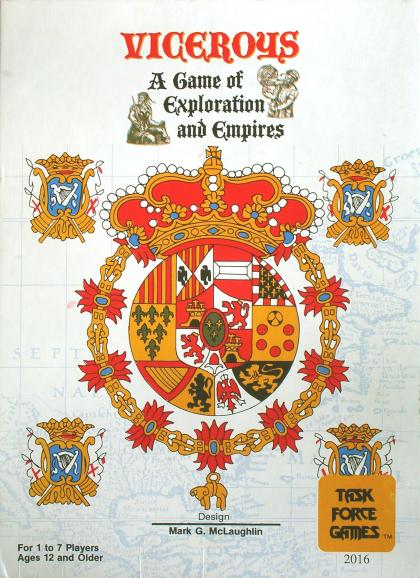 This wargame details the worldwide European explorations and colonizations of the 15th and 16th centuries.
The map is directly based on a "wrong" historical map. Event cards seem to cover just about every dimension of the period. The underlying game system also offers opportunity for strategy and negotiation as well as chaos. The seagoing players, Portugal, Spain, England, France, and the Dutch, each have national differences and advantages/disadvantages. This is also true for Russia and Turkey which can colonize overland. There is also provision for general European war. Multiple scenarios are provided. Also included are rules for 1 or 2 players which permit Spain and Portugal to participate as non-players.

One interesting dimension of the game is the idea that each player also has a "job" within the game, from which he occasionally earns a little income. One of them was even The Rules Lawyer, in charge of resolving any disputes!

In 1992, expanded to support 8 players, including China, with the Columbus expansion kit commemorating the 500th anniversary of Columbus' initial voyage.