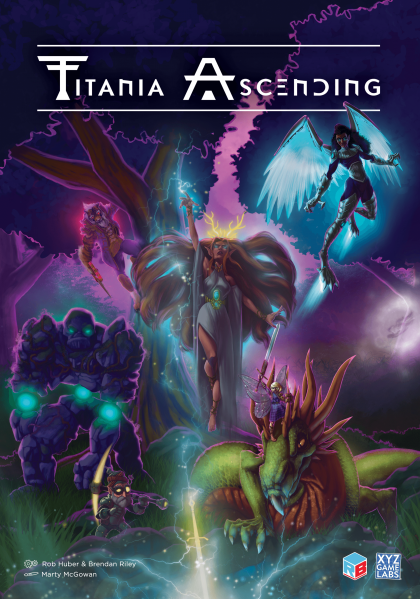 STORY:&#10;Titania, Queen of the Fae, has grown tired of humanity&rsquo;s disdain for nature&rsquo;s splendor. She plans to liberate Gaia, and has summoned you, her High Council of Sorcerers to manifest her will.&#10;&#10;Work together to consult the heavens and read runes. Mobilize Titania&rsquo;s loyal Fae and port them to Gaia, where they will recover her crown from the six hallowed citadels. Will you divine the path to victory? Gather your golems! Summon your sirens! The Earth trembles before... Titania Ascending.&#10;&#10;GAME OVERVIEW:&#10;Titania Ascending is a cooperative &ldquo;flip and write&rdquo; (and write) game for two to six players in which you and your friends become Titania&rsquo;s trusted High Council, coordinating the liberation of Gaia. In phase 1, you will populate your map with the units you want to send to Gaia; in phase 2, you will use your completed map to support the invasion.&#10;&#10;FILL IN YOUR MAP:&#10;In phase 1, Divination, you arrange Fae and Dragons, recruit aides (special assistants), and select the hallowed units who will seize the 6 hallowed citadels and secure the Shards of Gaia for Titania&rsquo;s crown. Take turns choosing which unit everyone will draw on their maps (map/player board), coordinating with other players to divine hallowed units, and recruit aides to earn rule-bending abilities. The phase succeeds when all six hallowed units have been divined. You fail if everyone passes before you complete this goal.&#10;&#10;USE YOUR MAP:&#10;In phase 2, Ascension, you open portals to Gaia (Earth) and send Titania&rsquo;s units into the field, using your hallowed units to seize the hallowed citadels. Take turns selecting missions to launch and shading in areas on your map that meet the mission requirements; meanwhile, the other players fill in similar areas on their maps. After you launch each mission, you can also send your hallowed units to capture the hallowed citadels. If you capture all six citadels, you restore Titania&rsquo;s crown, she ascends the throne of Gaia, and you win.&#10;&#10;WINNING AND LOSING: &#10;You win together by divining six hallowed units during the Divination phase, then by capturing the six hallowed citadels in the Ascension, thus taking control of Gaia and saving the humans from themselves.&#10;&#10;The whole team loses together in two ways:&#10;In phase one, Divination, you lose if all players pass before the six hallowed units have been divined.&#10;In phase two, Ascension, you lose if all players pass before claiming all six Shards of Gaia.&#10;&#10;-description from publisher&#10;&#10;