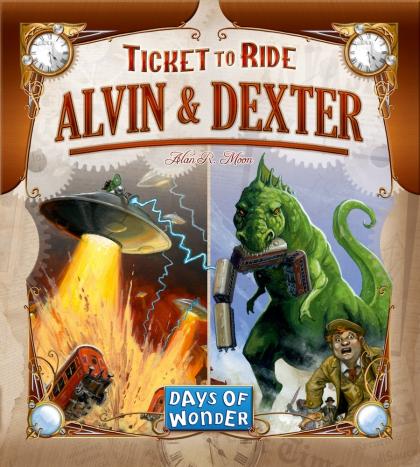 Alvin & Dexter – A Ticket to Ride Monster Expansion can be added to any of the various standalone Ticket to Ride games that designer Alan R. Moon and publisher Days of Wonder have released since 2004.

These monsters stymie players both during the game and once it ends. During play, no routes can be built into or out of a city where Alvin or Dexter are currently nesting, and during the final score tallying, any destination ticket showing a city where either monster stands is worth only half its normal value.

Desperately need to build a route to Seattle, Paris, or wherever else a roaming monster has set up shop? Discard one (or two) wild locomotive cards, and you can move the monster up to three (or six) cities away from its current location. Move a monster more than any other player, and you'll pick up an endgame bonus for your role as monster minder.