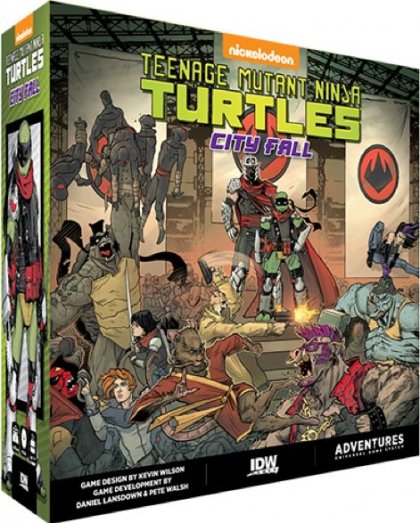 Taking on the role of one of their favorite &quot;Heroes in a Half Shell&quot; or their allies, in Teenage Mutant Ninja Turtles: City Fall players battle their way through scenario-driven campaigns focused on retelling the stories of the IDW comics or one of the many one-shot, quick play missions. Heroes have to battle it out against a team of villains played by either a villain player (in the 4vs1 mode) or an AI-controlled villain (in the co-operative mode). Depending on the game mode chosen, missions generally take between 30-120 minutes.&#10;&#10;City Fall is volume two in IDW's series of &quot;Adventures&quot;-branded miniatures games. Both it and volume one (Change Is Constant) are standalone games, while also being compatible with one another. Change Is Constant follows the first two story arcs of IDW's TMNT comic universe series, while City Fall focuses on the story of one turtle's unexpected recruitment into the Foot Clan.&#10;&#10;Each standalone box contains five unique heroes and a variety of villains associated with each story, with more than forty miniatures total.&#10;&#10;