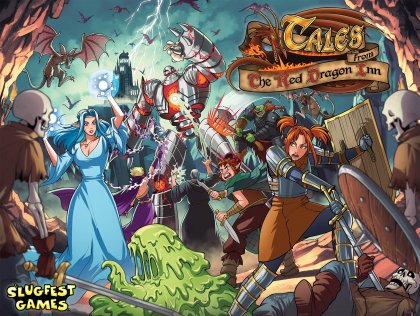 Tales from the Red Dragon Inn

Put down your flagons and strap on your swords, it&rsquo;s time to delve through some dungeons in Tales from the Red Dragon Inn! A new 1-4 player cooperative board game by SlugFest Games!&#10;&#10;In Tales you will take on the role of one of the famous characters from The Red Dragon Inn series of games as they tackle their day job of being big damn heroes. The multi-scenario campaign pits the players against game-controlled enemies tailor-made for each illustrated fold-out game map. Each scenario will take you to a new map, with new foes and even a few tricky puzzles to solve. You'll need to work together with the other players by equipping hero and item cards to support your allies who have their own unique abilities and roles.&#10;&#10;Each scenario has specific objectives, so how you and your party beat each one varies from &quot;kill all the enemies&quot; to &quot;survive X turns&quot; to &quot;protect this thing until something happens&quot; to &quot;get to this room on the map&quot;. All of the players win the scenario together by completing that scenario's final objective. They can also all lose together if any one of them are defeated in combat, or in the case of many scenarios, the enemies complete their own AI-controlled objective.&#10;&#10;