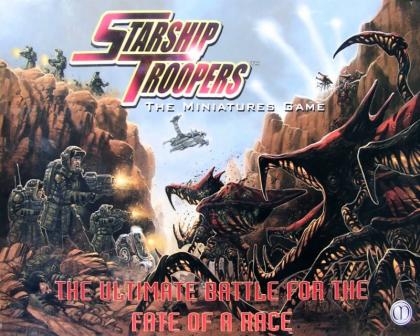 From publisher:
Stand by for the hottest action in 30mm science fiction gaming. Released in late March, Starship Troopers will bring the action of the novel, film and TV series straight to your tabletop in a fast-to-learn wargame.

Do you want to know more?

Collect armies of the Mobile Infantry, Arachnids and Skinnies (and that is just for starters - there are far more aliens out there in the galaxy!) and compete for the very survival of your species.

Written by Andy Chambers, the all new Starship Troopers miniatures game is a full blown sci-fi slaughter fest pitting the rugged Mobile Infantry against the full weight of the Arachnids. This box set provides everything you need to get started in the Starship Troopers game and includes;

A complete rulebook detailing both basic and advanced rules, as well as background material on the universe of Starship Troopers.

A complete card Bunker, ready to protect your MI in defensive missions. You will come to value this structure dearly. . .

Full army lists detailing everything we plan on releasing for both Arachnids and Mobile Infantry this year. You will not have to wait for an update to start using units such as Marauders, Tanker Bugs, SICON Observers, Hopper Bugs and many others.

It's a battle for the species - whose side are you on?