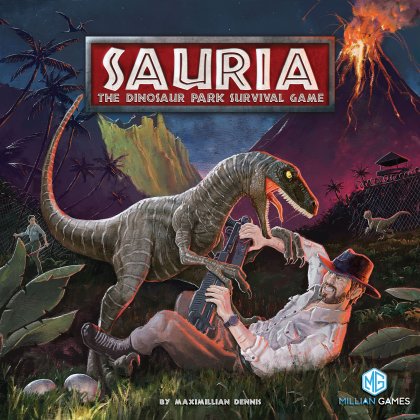 Sauria is a game where Players are vying to complete as many of their individual goals as possible to gain Victory Points and then successfully reach safety before time runs out. While this is happening, they must also survive various dangerous dinosaurs that are out to get them.&#10;&#10;Players take on the roll of 1 of up to 8 unique characters, ranging from the ruthless Hunter, the friendly Ranger, or the no-good Saboteur. Each character has a specific set of goals that no other Player knows. The Player who gets the most Victory Points by completing goals and escapes the island wins.&#10;&#10;Players take turns performing actions, engaging in unique encounters, and interacting with the park&rsquo;s locations. Meanwhile, dinosaurs reveal themselves, hunt, attack, and defend themselves against the Players and other dinosaurs.&#10; &#10; The game takes place over 16 Turns which make up 48 in-game hours. Once the 16th Turn is over, so is the game, and any character who has not reached safety is dead.&#10;&#10;To make matters even worse, at the 24-hour mark, the volcano begins to spew lava onto the island, destroying roads, jungle, and buildings, and panicking even the friendliest of dinosaurs.&#10;&#10;Get your friends together and hold onto your butts, because on Isla Sauria, if you&rsquo;re lucky, you might just survive.&#10;&#10;&mdash;description from the designer&#10;&#10;