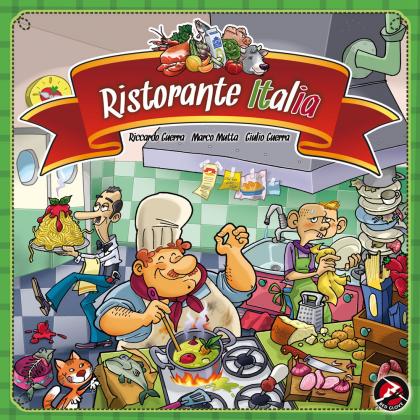 In Ristorante Italia, each player owns an Italian restaurant, a restaurant that he wants to make better than everyone else's in order to have the most points at the end of the game. To do this, a player must set up the menu, draw recipe cards, go to the town markets to collect needed ingredients, improve and enlarge the restaurant, improve the staff's cooking skills (as indicated by the cook-o-meter), and otherwise do whatever is necessary to have the most exemplary restaurant in the city.

Ristorante Italia lasts four phases, with each phase being comprised of three rounds. In each round, players can perform two actions from this list: draw recipe/wine cards, buy ingredients, buy rooms, take a "personal touch" cube, buy a bonus card, or buy a cooking training course. Special events during the game include VIP visits, culinary reviewer visits and the final National Cooking Contest, in which players will compete with their best recipes.

To achieve victory, players can follow an economic strategy – focusing on a menu which provides a strong revenue – or a quality strategy, in which the restaurant features special recipes matched to unique wines. Both strategies can lead to victory, and a balanced strategy can also be a good idea.

Ristorante Italia, scheduled for release in October 2011, can be played in two versions: Recipes for Novice Cooks (lighter version) and Recipes for Great Chefs (complete version).