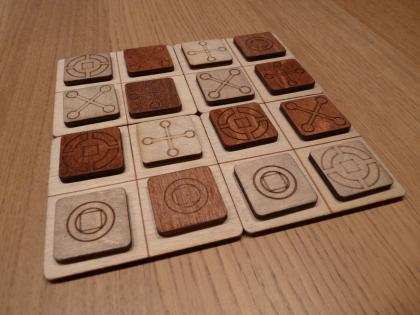 Imagine noughts and crosses (tic-tac-toe) but with the need to think several moves ahead and with each piece having a particular power and control over your opponent. This is Mijnlieff (Pronounced "Mine-leaf"). Try to create the most lines of 3 counters in your colour.

The game has four two by two boards. These are formed into a larger four by four board or, in a variant, arranged in different ways. Each Player has eight pieces with two of four different symbols. Each piece when played determines where your opponent can play their next piece.