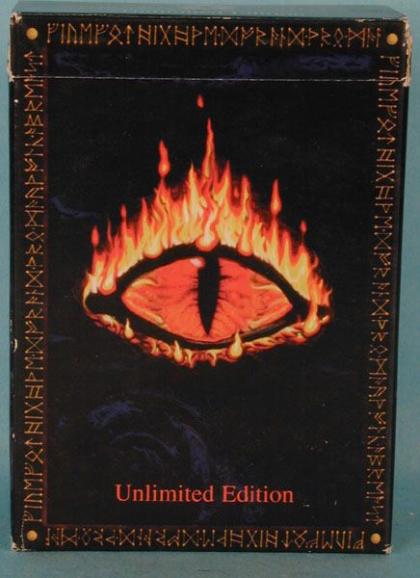 ICE's now-out-of-print CCG (they lost their license to produce Middle-Earth products in 1999). Players take the role of the Istari, or Wizards - most familiarly Gandalf, Saruman, and Radagast, but also Pallando and Alatar - in the struggle against Sauron in Middle-Earth. Each player competes to bring the greatest strength to bear against the Shadow, including Factions such as the Riders of Rohan or the Great Eagles, allies like Gwaihir or Shadowfax, items such as the lost Palantiri, Glamdring, or Narsil, and the completion of various quests - from the relatively straightforward rescue of prisoners through the involved Reforging of the Sword that was Broken, restoration of the White Tree to Minas Tirith, or the quest of quests, the destruction of the One Ring.

Players build decks in which half are composed of resource cards and half of hazards, dedicated to the stopping of your opponent. This is where the big bad guys come in, with cards for the 9 Nazgul, a couple of Dragons (Smaug being the recognizable one), Shelob, and the Balrog.