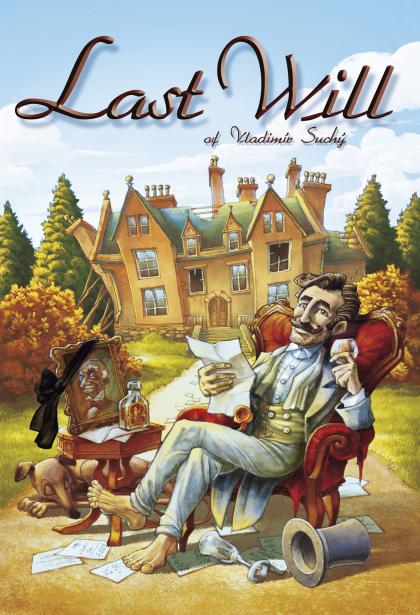 In his last will, your rich uncle stated that all of his millions will go to the nephew who can enjoy money the most. How to find out which nephew should be rich? You will each be given a large amount of money and whoever can spend it first will be the rightful heir. Visit the most exclusive theatres or eat in the most expensive restaurants. Buy old properties for the price of new ones and sell them as ruins. Host a huge party in your mansion or on your private boat. Spend like your life would depend on it. Spend to become rich! If you're the first to run through the money on hand, you'll receive the rest of his inheritance – oh, and win the game.

In Last Will, each player starts with a certain amount of money, an individual player board, two errand boys and two cards in some combination of properties and helpers. At the start of each round, lay out cards from the appropriate decks on the offering boards; the four regular decks are properties, companions, events, helpers and expenses, with special cards forming a deck of their own. The particular mix of cards varies by round and by the number of players.

Each player then chooses a plan for the round, with each plan indicating the number of cards the player draws (drawn immediately from the four regular decks in any combination), how many errand boys he can use later (one or two), the number of actions available to him that round, and his spot in the playing order that round. In the playing order for that round, players then take turns choosing an action with their errand boy(s), with those actions being:

Take a card on display and add it to your hand.
Draw a card from any regular deck – This can be chosen only once by each player.
Visit the opera and spend $2.
Adjust the value modifiers in the property market.
Take a player board extension, thereby giving you room to play more cards.

Players then take actions in the playing order for that round, with each player having as many actions as indicated on his plan. Actions let you play one-time events (which have a cost, possibly variable); helpers and recurring expenses (which are placed on your individual player board); and properties (which cost money and may depreciate over time). You can often play companions with events or recurring expenses – of course you should bring a date to the opera or a horse on your yacht! – to increase their cost. You can also use actions to activate cards on your player board, possibly with one or more companions and always with the goal of spending money. Helpers and special cards can provide you with unique powers to further boost your profligacy.

At the end of each round, you must discard down to two cards in hand, and properties that can depreciate do so; this is good as a player cannot go bankrupt if he owns properties, and the only way to get rid of properties is to sell them, which regretably puts money back in your hands unless the depreciation was intense or you manipulate the market.

If a player has no money and no properties, he declares bankruptcy and the game ends at the conclusion of that round; otherwise the game ends after seven rounds. The player who has the least money (or even who is most in debt) wins.

Voti e commenti per Last Will