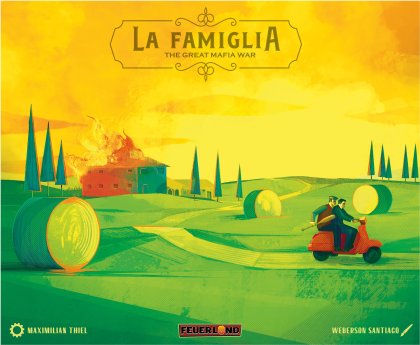 In the 1980s, a merciless battle raged in Sicily that would later go down in history as &quot;The Great Mafia War&quot;. Different mob families fought with and against each other for supremacy in southern Italy.&#10;&#10;In La Famiglia: The Great Mafia War, you play against each other in teams (2 vs. 2) to take control of Sicily. Six different mafia families, each with special abilities, are at your disposal. The game rounds are divided into two phases: In the planning phase, you develop your abilities and bring fighters as well as secret orders to the board. In the combat phase, these orders are revealed and executed. Here, you use your fighters and bombs to dominate as many regions as possible. The combat system is both simple and innovative, making every fight an exciting psychological duel. The team that best combines and coordinates its abilities will finally dominate Sicily.&#10;&#10;La Famiglia is an extraordinary team game that provides lasting excitement through asymmetric abilities and a variable game set-up.&#10;&#10;&mdash;description from the publisher&#10;&#10;