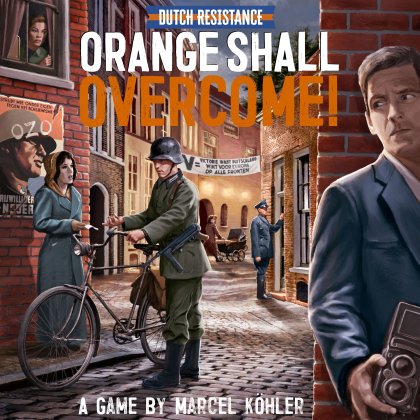 Dutch Resistance: Orange Shall Overcome! is a scenario-based co-operative game about the Dutch Resistance during the Second World War. In a period when most people were too afraid to oppose the occupying Nazi forces, some decided they did not want to sit idly by. They formed groups and found ways to sabotage the occupiers' plans. You are one of those resistance fighters.&#10;&#10;In Dutch Resistance: Orange Shall Overcome! each player controls a character that is based on a real resistance fighter. These characters have their own deck of 6 bonus cards, making them unique. During each turn, you have 3 of these character cards in your hand that you can choose from to improve or replace one of your normal actions.&#10;&#10;The game has 6 different scenarios that each focus on a different aspect of the resistance work in the Netherlands in WWII. Each scenario therefore has its own winning and losing conditions, in addition to the general losing condition: one character loses all their courage or their alibi. There is a deck of occupier cards that acts as a timer: 2 of these cards are resolved each turn. When all of the cards from the deck are resolved, you don&rsquo;t lose immediately. You instead keep resolving the last special &ldquo;Repercussions&rdquo; occupier card, which is very dangerous, at the end of each player's turn until you either win or lose the game. The 6 scenarios have their own location, occupier, and control cards. In most scenarios you need to use the 4 available resources (money, network, rations and sabotage), in addition to certain items such as radios and bikes, as well as the different locations that are part of that scenario to either expand your network, keep people safe, or gather secret information.&#10;&#10;Dutch Resistance: Orange Shall Overcome! is a turn-based game in which you have 3 phases per turn: the preparation phase, the action phase, and the occupier phase. In the preparation phase you prepare 2 occupier cards that will be resolved during the 3rd phase of a turn, unless you manage to avoid these events from happening during the action phase. In the action phase you have 4 action points for your own character, and 1 that has to be spent by another player. This way another player has a sort of &ldquo;mini&rdquo; turn during your own turn. These action points can always be spent on the following 5 things:&#10;&#10; Move to an adjacent location on the board. Depending on the token on the board you do 1 of 2 things. You either roll the 12 sided dice(D12) and compare the result with you courage or alibi to see if you lose one or not, or you resolve a control card when there is a policeman or soldier on the road.&#10; Spend a train ticket if you have one to go anywhere.&#10; Raise your courage or alibi by 1.&#10; Try to remove an occupier card by rolling the D12 and compare it with 1 of the 2 occupier cards that will be resolved in phase 3.&#10; Use the action that is available on the location that your character is on.&#10;&#10;&#10;Once per turn you can also spend one action point to use a card from your hand.&#10;&#10;In addition to these 5 general actions, there are often scenario-specific actions. There are also some free actions you can take that don&rsquo;t cost any action points. You can, for example, exchange resources if you are in the same location as another character, without spending action points to do so.&#10;&#10;&mdash;description from the publisher&#10;&#10;