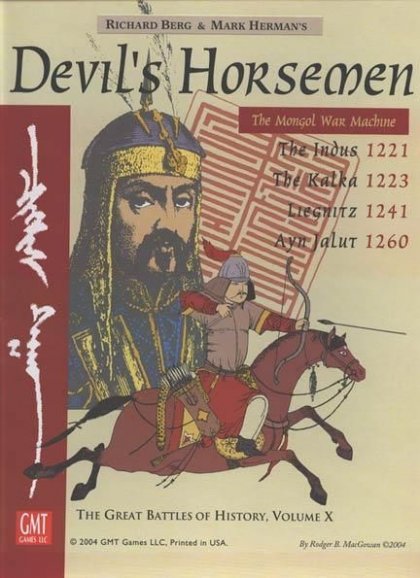 &quot;The Mongol War Machine in the 13th Century&quot; - Volume X in the Great Battles of History Series (GBoH).&#10;&#10;&#10;(from GMT Games website:)&#10;&#10;The Great Battles of History series is back with Devil's Horsemen, an examination of the military tactics of steppe tribe warfare, as immortalized by the mighty armies of Genghis Khan and the Mongols. The game focuses on cavalry and archery action, featuring mounted archers of exceptional skill. Devil's Horsemen depicts the four major battles of the era - The Indus, The Kalka, Liegnitz and Ayn Jalut.&#10;&#10;Devil's Horsemen features basic rules for both regular and SimpleGBoH play. The rules bring the system into full flower of mounted archery, with a detailed, augmented set of archery and cavalry mechanics that include various types of Shower Fire (as opposed to plain Volley Fire), Impetuosity and Aggression, Feigned Retreat, Harass and Disperse tactics, and Rally to Standards, with the various armies and units being rated for their ability to use these.&#10;&#10;Devil's Horsemen presens a truly colorful array of armies for you to lead into battle: there are 10 full tumen (divisions) of Mongols, plus Polovtsians, Galicians, Chernigovians, Kievans, Persian Khwarazmians, Poles, Silesians, Bohemians, the great Teutonic Knights, and the first army to ever significantly defeat the Mongols, The Mamluks.&#10;&#10;These mighty armies show up in four great battles of the period (ranging from battles needing 1/2 mapsheet to two full-mapsheets).&#10;&#10;The Indus (Genghis Khan vs. Shah Jalal ad-Din and the Khwarazmian Persians, 1221). One mapsheet in size, this is the battle that gave The Mongols control over all of Central Asia.&#10; &#10;The Kalka (Prince Subudei vs. the combined Armies of Rus, 1223). Two mapsheets in size, this battle includes two massive (and very nattily dressed) armies, with the Rus suffering under fractured command, and the Mongols giving us a foretaste of the famous Zulu horns of the buffalo tactics.&#10; &#10;Liegnitz (Prices Baidan and Kaidan vs. Henry the Pious and an army of Eastern Europeans, 1241). A 1/2 mapsheet battle which introduced Europe to the Mongols, and from which we get the famous Christian prayer of the era, From the Fury of the Tartars, oh Lord, Deliver Us. But you do get to use the best European heavy cavalry of the day, the Teutonic knights, under fearsome commander, Poppo.&#10; &#10;Ayn Jalut (Prince Ketbugha vs. The Mamluks, 1260). A 1/2 mapsheet battle that saw the first real defeat of a Mongol Army, this time by the new Middle East Muslim power, the Mamluks. Granted, this was a second-rate, rear-guard group of Mongols, but the Mamluks showed they were a new force to reckon with.&#10;&#10;COMPONENTS&#10;979 full-color counters&#10;Two full-color double-sided 22x34&quot; mapsheets&#10;Rules Book&#10;Scenario Book&#10;One Player Aid Card&#10;One 10-sided die&#10;&#10;DESIGNERS: Mark Herman and Richard Berg&#10;ART DIRECTOR/PACKAGE DESIGN: Rodger B. MacGowan&#10;MAP ART: Mark Simonitch&#10;COUNTER ART: Mark Simonitch, Rodger B. MacGowan, Mike Lemick&#10;&#10;