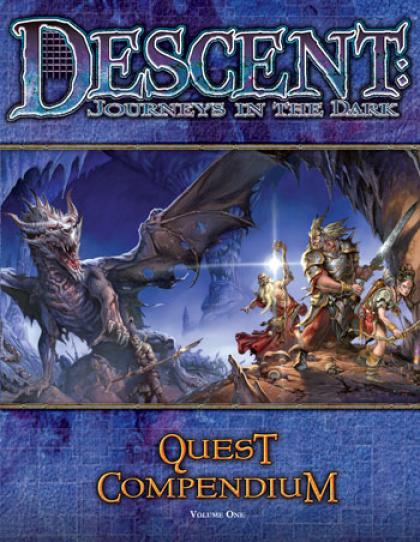 Descent: Journeys in the Dark – Quest Compendium – Volume One

Descent: Quest Compendium presents in one 96-page hardbound volume sixteen of Descent's most cunning, deadly, and puzzling scenarios to your gaming table, brought to you by a team of acclaimed and award-winning game designers and authors.

• Monte Cook (D&D 3rd Edition) sounds an angel's plea for help to save the world from being pulled across a dimensional divide and permanently warping reality.

• Keith Baker (Gloom) leads heroes directly into the middle of a deadly blood feud between two restless spirits of hatred embodied. Caught in the epic battle, choosing a side will be the hardest decision to make.

• Kenneth Hite (Where the Deep Ones Are) adapts a classic film to the fantastic setting of Descent and finds an unlikely ally only too happy to help uncover a precious treasure, but for a price...

• Mike Selinker (Yetisburg) entraps the heroes within a demonic puzzle that threatens to destroy the world we know in a whirl of chaos.

• John Kovalic (Dark Tower) takes you back to an old haunt on an unexpected mission on behalf of a former enemy, featuring some of John Kovalic's trademark wit and commentary.

Voti e commenti per Descent: Journeys in the Dark – Quest Compendium – Volume One