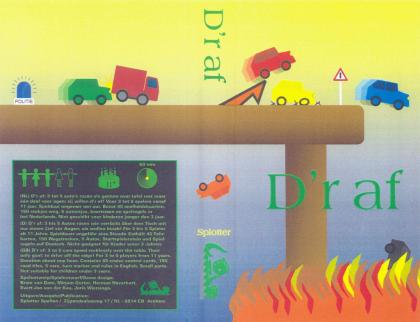 The object of the game is to be the first to drive your car off the side of the table. A road which has as many lanes as contestants is constructed from a number of gray road tiles. Each turn, players select a card from 2 to 10, which is the number of spaces they're moving. After these are revealed remembering that players cannot duplicate a card played by someone previous, players move forward down the road. Each of the cards allows for a certain number of road tile placements from your supply, a number of maneuvers per turn, and the damage your current speed with inflict should you careen into another car. Additionally, a percent of the tiles have special actions associated with them, which give the car on them the ability to jump, or hit a semi-truck, or skid out of control, or just plain slow down 'cuz there's a Smokey comin' on his flipside... The game is over when a car reaches the edge of the table, which gives the game a variable ending. Plus if ever a group of cars pulls out to a six-space lead, then all trailing cars are eliminated.