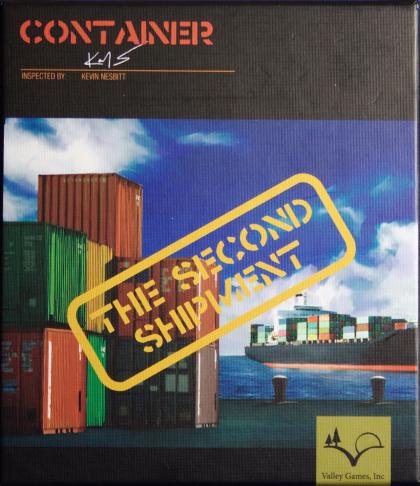 Container: The Second Shipment includes four different expansions that can be mixed and matched as players want. These expansions are:

Factory and Warehouse Restrictions — These two expansions work similarly, consisting of sets of cards that are stacked in a particular order. As you build more factories (or warehouses), a new restriction card takes effect, limiting the prices at which you can offer containers. In effect, these cards mimic economies of scale, allowing players to drop prices as they invest more in infrastructure.

Financiers — Players can now loan money directly to others, allowing them to earn the interest previously paid to the bank. A player who is looking for financing doesn't have to accept a loan offered by another player, but if she doesn't, then she must pass on borrowing money at all that turn. Competing Financiers may sweeten the deal by offering bigger loans for the same interest payment. Someone who defaults on a loan from another player will typically lose a container, factory, or warehouse to the lender to repay the debt.

Monopoly — A single player can now have more than one factory of the same color, potentially monopolizing production of a container type.

Designer Kevin Nesbitt says, "A lot of the concepts that I'm introducing were discussed with Thomas and Benno back when the base game was in the development stage (I did most of the development on the base game, as well). So, in some ways, Thomas and Benno have contributed their thoughts to this expansion." This expansion was available in a limited edition of 1,000 copies; any unsold at Spiel were to be available later on the Valley Games website.

Since the first print run sold out, a second print run was planned: "The final print run is due for completion and delivery by March 2009."