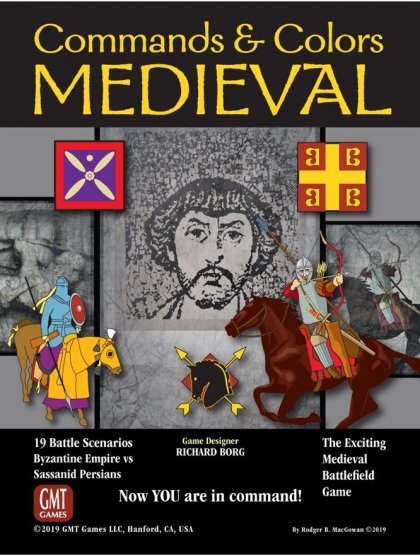 Game description from the designer:&#10;&#10;Commands &amp; Colors: Medieval is based on the Commands &amp; Colors game system and by design is not overly complex. The Medieval game introduces many new game concepts to the Commands &amp; Colors system, which add historical depth and flavor. Some of the new concepts are:&#10;&#10;&#10; Superior armor and status when battling&#10;&#10;&#10;&#10; Cavalry units increase to 4 blocks&#10;&#10;&#10;&#10; Heavy infantry battle dice are reduced from 5 dice down to 4&#10;&#10;&#10;&#10; Light Bow Cavalry units can employ the Parthian Shot when they evade&#10;&#10;&#10;Still, some Commands &amp; Colors game mechanics remain familiar to players of other games in the system, like the deck of Medieval Command cards that drive movement while creating a &ldquo;fog of war,&rdquo; and the battle dice that will resolve combat quickly and efficiently. The stylized battlefield scenario maps emphasize the important terrain features and highlight the historical deployment of forces in scale with the game system. The scale of the game is flexible, and varies from battle to battle. For some scenarios, a unit may represent a Chiliarchy of soldiers, while in other scenarios a unit may represent just a few brave warriors. The battlefield tactics, however, that you will need to execute to gain victory conform remarkably well to the strengths and limitations of the various medieval unit types, their weapons, the terrain, and history.&#10;&#10;The medieval battles showcased in the scenario book focus on the historical confrontations between the Byzantine Empire and Sassanid Persians (530 to 627 AD) with a slight detour to battle the Moors and their rebel allies (645 - 648 AD). The Byzantine Empire during this period of medieval history was one of constant transition and reorganization. Its army tended to mirror its eastern adversaries by deploying an increasing number of armored cavalry formations (Cataphracts) and more missile troops. Yet, it was how the Byzantines adapted their battlefield tactics in relation to the enemy it faced that is perhaps the chief reason for the longevity of their Empire.&#10;&#10;Although the Byzantine army fought on other frontiers, against a multitude of opponents, Visigoths, Vandals, Ostrogoths, Franks, Alemanni, those conflicts are beyond the scope and space of this one package. Additional expansion modules that address those battles will be forthcoming.&#10;&#10;