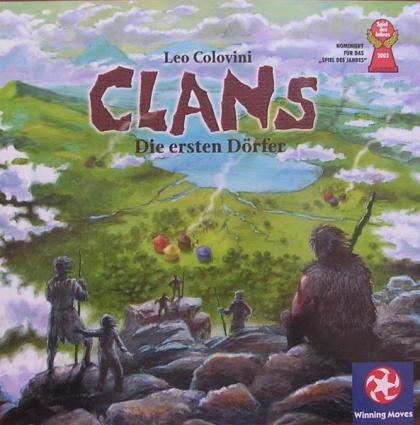 The game is set in late prehistory, a time of transition – when our distant ancestors, who had struggled and barely survived for ages in very small nomadic groups, began to feel that their lives would be more secure and less arduous if they formed larger groups. This led to the formation of the first villages.

In Clans each player is trying to achieve victory by scoring as many points for their color as they can. This is tricky as each player's color is chosen at random and kept hidden until the end of the game. Each region of the board contains five areas, each one of five different types. Each area receives one hut each of five different colors. On their turn, a player moves all huts from one area containing less than seven to an adjacent area, all the while trying to hide which color is theirs. After moving , if one or more areas are completely surrounded by empty ones, they are scored. If all colors are present in a scoring, any colors with only one hut present are removed. The epoch track allows a limited number of areas to score before the game ends and each scoring will either gain a bonus or score nothing depending on the terrain type it occured in and how far along the track the game has progressed; each scoring advances the track, and each section of the track gives different terrain types bonuses and penalties.

Once at least twelve areas have scored the game ends, players reveal their colors, and find out who was best able to score the most points while keeping their color a secret.