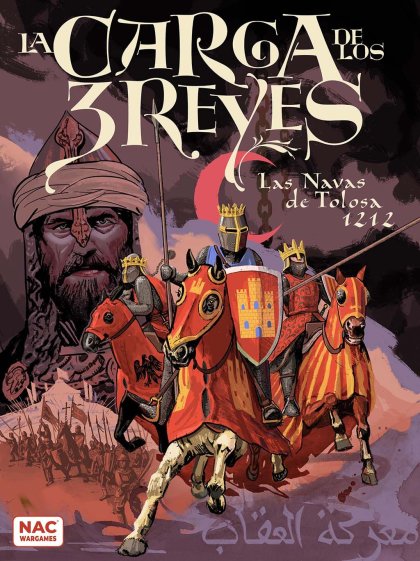 THE CHARGE OF THE 3 KINGS 1212: BATTLE OF LAS NAVAS DE TOLOSA&#10;&#10;An epic clash between Christian and Muslim armies with a dynamic impulse-based game system that will delight even the most demanding strategists.&#10;&#10;In 1212, Alfonso VIII decided that it was time to take revenge for his defeat at Alarcos a few years earlier at the hands of the Almohads. They had come to the Peninsula from the Maghreb imposing their rule and strict religious norms on the Andalusians with plans to expand Islam into the Christian-held territories. At that time, the Peninsula was divided into fie Christian kingdoms: Castile, Leon, Aragon, Portugal, and Navarre. However, being bound by the same religion did not stop them from fighting amongst themselves, and by no means where they unified nor did they have the same interests. Alfonso VIII of Castile requested the bull of the crusade for his fight against the Almohads, which meant that if he could not get the other Christian kingdoms to participate, he could at least make sure he would not be attacked from behind as he advanced south. The Pope grants this endeavor the status of a crusade, which results in knights and kings from other kingdoms and places in Europe joining Alfonso&rsquo;s campaign, in addition to his neighbors on the Peninsula.&#10;&#10;Each player has 5 formations and a deck of tactical cards and a deck of strategic cards. During his turn, the player will receive tactical and strategic cards and will activate 3 of his formations, each in a different impulse and alternating with his opponent. In each impulse you can play a tactical card, even in the opponent's impulse if the card is a reaction card. Additionally, during any moment of the turn, the player can play a strategic card.&#10;&#10;Another strategic tool that each player has in his hand is the so-called &quot;Command Point&quot;, which also has two aspects: the &quot;Ordinary Command Point&quot;, to be used every turn by rolling the dice, and another of direct use, called &quot;Single Command Point&quot;, of a single use in the whole game and that guarantees automatic success. With this command point you can alter or cancel different situations of the game, such as cards played by the opponent, anticipate the opponent by moving consecutive impulses, cancel the opponent's command points, avoid own defections, etc.&#10;&#10;On each side there are units with heavy and light armor, both on horseback and on foot. The firing table discriminates the effectiveness according to the armor of the target, the weapon (crossbows, bows), the distance and whether the firing unit is mounted or not. Reaction shots are possible in the face of opponent's attacks.&#10;&#10;Cavalry charges and possible reaction charges are also represented and we can find identified different types of units with specific rules, such as spearmen, black guards, religious fanatics, military orders, ultramontane crusaders, azgaz archers, etc.&#10;&#10;The main characters of the battle are represented, such as the archbishop of Rada, the kings of Castile, Aragon and Navarre, the caliph and the Almohad vizier, etc., many of which have particularities that will have to be taken into account.&#10;&#10;The terrain is practically flat except for the Cerro de los Olivos and the defensive palenque located at the top, which allows defensive advantages.&#10;&#10;The game allows a high level of replayability thanks to the fact that the decks of cards and their distribution (with common cards and specific cards of each faction) achieve very diverse possible combinations. In addition, the historical deployment is facilitated, but with zones where the different formations are deployed freely by the player and in secret, so that within the delimited zones there is diversity of placement. Free placement is also allowed, which comes to permute the formations of place. Therefore, fun is assured.&#10;&#10;In short, a historical war game, but that will not restrict players from making their own decisions. That is why The Charge of the 3 Kings, Las Navas de Tolosa 1212 is a highly recommended game for a wide range of public and, especially, for lovers of historical strategy.&#10;&#10;Contents:&#10;&#10;&bull; 1 35.8&rdquo; x 26&rdquo; double sided game board&#10;&bull; 3 Sheets with 290 game counters&#10;&bull; 8 Dice (2 12-sided, 4 six-sided, and 2 eight-sid-ed)&#10;&bull; 1 Fog of War screen to hide starting deployment&#10;&bull; 78 cards (Tactics and Strategy)&#10;&bull; 1 Administrative Display&#10;&bull; 2 Ranged Attacks Tables/Player Aids&#10;&bull; 1 Summary sheet.&#10;&bull; 1 Rulebook English&#10;&bull; 1 Rulebook Spanish&#10;&bull; 1 Playbook English&#10;&bull; 1 Playbook Spanish&#10;&#10;MAIN CHARACTERISTICS&#10;&#10;&bull; Recreate this epic battle in less than 3 hours.&#10;&bull; The game cards allow players to alter the game rules in order to surprise their opponent and foil their plans.&#10;&bull; Each side has at their disposal a wide variety of units with special abilities that affect the course of the battle, along with a unique deck of cards that will en-sure no two games are alike.&#10;&bull; Thanks to the game&rsquo;s impulse-based system and the possibility to interrupt your opponent&rsquo;s turn, both players will have a great time as the battle unfolds. &#10;&bull; The game&rsquo;s design and illustration has been meticulously crafted with the idea of immersing players in a medieval-themed experience. &#10;&bull; Historical accuracy. Includes a scenario book that pro-vides a detailed summary of the battle, how it unfold-ed, the aftermath, as well as an example of play.&#10;&#10;&mdash;description from the publisher&#10;&#10;