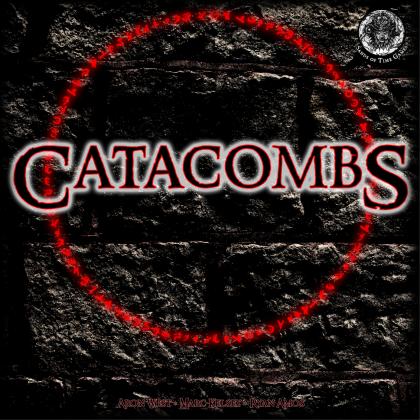 Catacombs is an action/dexterity-based adventure board game. One player controls the Overseer, controlling the monsters of the catacombs; the other player(s) control the four heroes who cooperatively try to defeat the monsters and eventually the Catacomb Lord. Each of the heroes has special abilities that must also be used effectively if they are to prevail.

The main mechanism of Catacombs is for the players to flick wooden discs representing the monsters and the heroes. Contact with an opposing piece inflicts damage, but missiles, spells, and other special abilities can cause other effects. When all of the monsters of a room have been cleared, the heroes can move further into the catacomb. Items and equipment upgrades can be purchased from the Merchant with gold taken from fallen monsters. The Catacomb Lord is the final danger that the heroes must defeat to win the game; conversely, the Overseer wins if all of the heroes are defeated. The game is designed for quick set-up and fast play within 30 to 60 minutes.