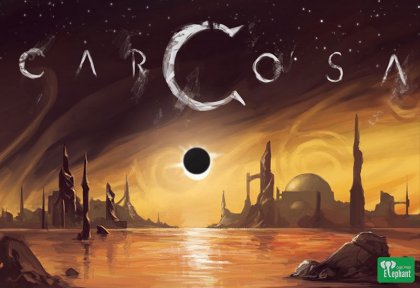 In Carcosa, you summon forth the home of the Tattered King, one tile at a time, using your cultists to control leylines, conduct rituals, and influence the districts of Carcosa itself. If they displease you, you can sacrifice them to the dark waters of Lake Hali for the pleasure of the King.&#10;&#10;Each player leads a Lovecraftian cult, taking turns using their prophet to select a tile representing a section of Carcosa from the cult board and adding it to the growing magnificent landscape of ritual sites, leylines, towers and domes. Players can then deploy cultists to control a leyline, conduct a ritual, or influence the districts they have just summoned.&#10;&#10;But Carcosa is no normal city! You must stabilize your summoned tiles with power drawn from leylines or they may be reshaped by other cults! Recruit more cultists by conducting the Forbidden Play at theatres you summon! Send your cultists to gather power and watch them be driven mad by the terrible secrets! Use your oracles to spend power on game-changing spells! Sacrifice your cultists to the horrific avatars of the King!&#10;&#10;The game will end either when a cult gathers enough power to conduct the final summoning of the King in Yellow or enough tiles are placed such that Carcosa becomes a permanent feature of our Earth and the cult with the most power seizes control. Only one cult can succeed in these insane tasks &mdash; but in Lovecraft's mythos, can one truly call that winning?&#10;&#10;