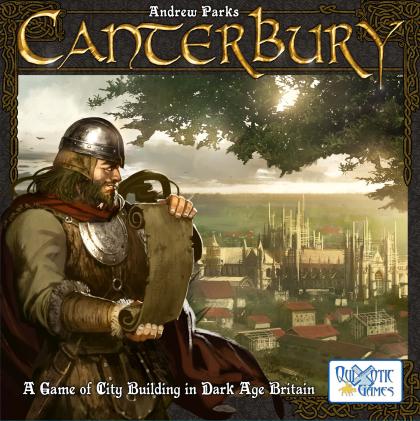 Toward the end of the 6th century A.D., King Ethelbert of Kent established the old Roman city of Canterbury as his new capital. In Canterbury, 2 to 4 players represent Saxon Lords who are charged with building the city into a prosperous capital. The Saxon Lords must use the city's meager starting resources to build up the 25 districts of Canterbury and provide key services to its citizens.

The key services are (in order from most basic to most prestigious) water, food, religion, defense, commerce, and culture. These services are provided by structures that are built in the various districts. However, structures that provide higher end services can only be built if the more basic services are already present in that district. For example, a Saxon Lord cannot order the construction of a chapel (which provides religion) unless there is already water and food in that district.

As new structures are built in the city, the city grows more prosperous. While each Saxon Lord jealously guards his or her own prosperity and achievements, they all benefit as a whole from the growing prosperity of the city itself. The city treasury grows as the city prospers, and the Saxon Lords must balance their publicly scrutinized withdrawals from the treasury with the ambition of their building projects. When the city reaches the peak of its prosperity, the game ends and the player with the most individual prosperity wins the game.

Object of the Game

Every structure that is built in Canterbury provides Prosperity Points both to the city and to the Saxon Lord who ordained its construction. When the City Marker passes 300 Prosperity, there is one final round of play, and then the game ends. The player with the most individual Prosperity earns the accolades of the king and wins the game.