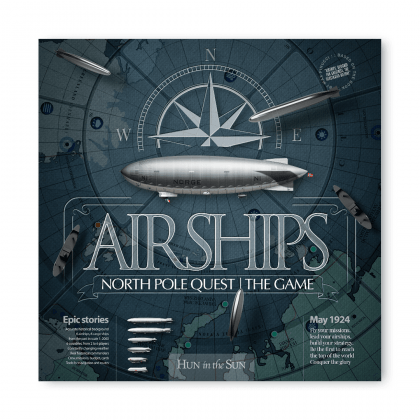 Kickstarter is now LIVE! https://www.kickstarter.com/projects/airshipsgame/airships-north-pole-qu... North Pole Quest will take you back to 1924, in the golden years of airships, when nations started aiming for the Arctic, the last inviolate frontier, and for its symbol: the North Pole. Being the &quot;first&quot; was not only a matter of prestige, but also of great opportunities: strategic explorations, lands to be annexed, trade routes to be opened.&#10;&#10;Beautiful (and highly detailed) airship models, plus abstracted navigational and flying tools, are the hands-on parts of the game, while cards and changing weather will continually deal players new challenges.&#10;&#10;Each player takes the role of one country's airship commander, having to organize a crew and certain equipment choices, and then beginning a series tertiary flights for fund-raising and prestige. Each team will require a &quot;support ship&quot; and landing equipment, and these have to coordinate with flights as well, especially for the big jump to the North Pole. Players select from a list of &quot;actions&quot; that they can take each turn and must judge which ones are the priority for this turn and what can wait.&#10;&#10;The game is not just &quot;Start at Point A and fly to North Pole.&quot; The tertiary expeditions, for fund-raising and publicity, allow players to better equip their &quot;team&quot; to make the longer journey, and to hire specialists for their crew members who have distinct abilities for extra support. Weather plays a key role and a clever device keeps the weather changing in realistic patterns. Players must factor the current weather and what is anticipated as they make choices of actions and routes. Airships can be damaged and this costs time and money to repair.&#10;&#10;The campaign game ends-- as expected-- with one airship reaching the North Pole and returning to its support ship. (You have to get back to win!)&#10;&#10;Shorter scenarios offer the chance to &quot;race&quot; to other locations and deal with different challenges. There is also a solo, &quot;training&quot; mission scenario to help players learn how to coordinate actions for the best performance.&#10;&#10;