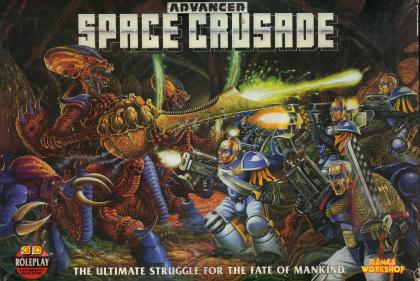 This game basically recreates small-unit actions during the war between the Imperium and the Tyranids' Hive Fleet Kraken. One player moves squads of Space Marine Scouts inside the guts of a Tyranid Hiveship, and the other defends the bioship by placing "blips" which can be Tyranid warriors and other monstrosities.
The game is designed to be played as a campaign, although suggestions for playing one-off games are included. The game comes with three Space Marine Scout squads and six Tyranid Warriors. It has rules for including several miniatures from the old WH40K Space Marine and Tyranid range. (Rules were also published in White Dwarf for using an Imperial Guard or Ork force instead of Space Marines).
The game mechanics are very simple: Space Marines move and fire and then the Tyranids move and fire. The map is built gradually by the Tyranid player from a complete layout he keeps secret as the Space Marines explore the ship. The space marines explore the bioship in search of its vital organs, hoping to survive the waves of aliens as they head deeper inside.