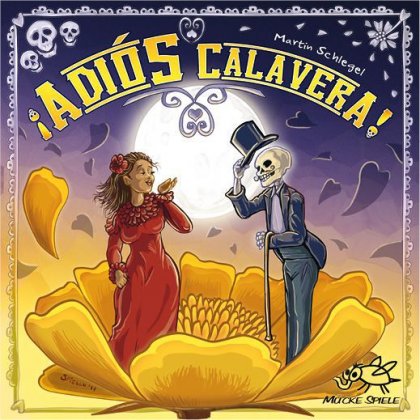 Every year at harvest time on the Day of The Dead, the souls of the deceased visit the world of the living to celebrate with their loved ones. There is dancing, singing, drinking, and eating! Before everyone goes their separate way again, the living and the dead make a bet: Whichever group makes it back again to their own world first has say over the other one for a year. The race begins...&#10;&#10;&iexcl;Adios Calavera! is a tactical race between the living and the dead for two players, one controlling the dead, the other the living. Each player has eight pieces and sets them up on a edge of a roughly 9x9 board next to the edge of the opposing player. Players are thus not directly opposite each other, but seated at a right angle. The first player to get their eight pieces off their opposing side of the board wins.&#10;&#10;On your turn, you move one of your pieces. A piece has as many movement points as pieces on the line where it is standing orthogonally (i.e. at a right angle) to the main direction towards your goal. This includes all pieces: both your own and your opponent's, including the piece being moved. Some pieces also have special abilities, such as moving through obstacles, switching with other pieces, or taking additional movement.&#10;&#10;