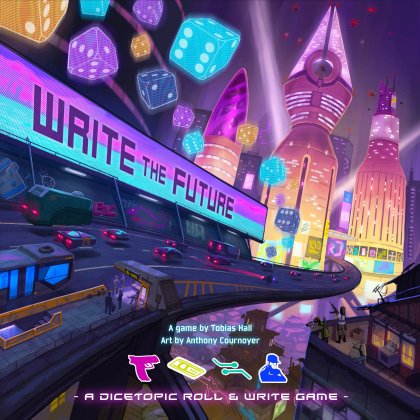 Our organisation is thriving more than ever! And credit where credit&rsquo;s due, your exceptionally &quot;stern&quot; methods has not gone unnoticed! As we&rsquo;re branching out we want you to establish a new network and lead your gang...ehrm.. ambitious team to prosperity! The most successful of the lot will become my successor! Well, you know, &rdquo;eventually&rdquo;... After a few years, once you've learned the ropes by fetching coffee and mastered the art of foot massage... BUT first things first! Let's write the future and get going with this soon to be EMPIRE of yours!&#10;&#10;In Write the Future, all the players will create their own thriving criminal empire in a crime-infested cyberpunk future by cleverly filling their Player Sheet with beautifully (or less so) drawn agents, intel, weapons and money! Not only will you take on a big variety of missions, unlock different bonuses and create spectacular combos, you will also be able to manipulate the value of the resources at the black market!&#10;&#10;In every round dice are rolled and randomly placed on Neighbourhood Cards. Players will then draft a combination of dice and card in turn order (or play simultaneously in the traditional mode, choosing 1 of 3 combinations). Players will then decide what to do with the dice. The color of the dice dictates what resource it is and the number in which row &amp; column of your District Sheet you're able to draw it. When you complete full rows and columns, you'll unlock different Bonuses allowing for neat combos!&#10;&#10;As soon as a player has completed 4 rows/columns or maxed out 3 Black Market resources it signals the end of the game, and game proceeds until everyone has been the first player an equal amount of times (if playing the traditional mode, the players will just play one final round).&#10;&#10;Players will then score points for the Mission Cards, their row/column Bonuses and from the Black Market! The player with the most Victory Points wins the game!&quot;&#10;&#10;