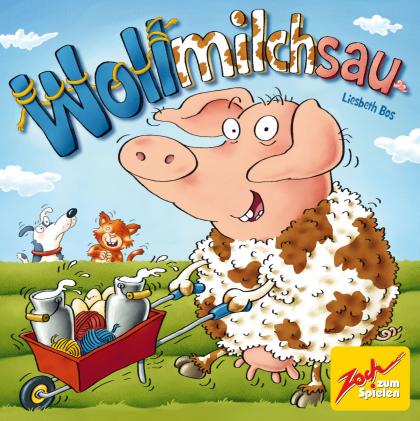 Another entry in Zoch Verlag's family of cute animal games, Wollmilchsau is a speedy reaction game in which you want to name the right animal on a turn – but which animal is right may be harder to determine than you think.

To set up, shuffle the deck of animal cards, then divide it into two face-up piles of cards; each card shows one of six animals: mouse, cat, dog, sheep, pig, or cow (from smallest to largest). Take one card from the top of one deck, and insert it face-down halfway through that deck.

All players compete at the same time. One player rolls a die that has one of the six animals on each face. The first player to yell out the name of the animal rolled will score – except if that animal is on one of the face-up cards; in this case, players must yell out one of the animals not visible on the top of the decks, with the first player doing so scoring – except for the final rule for animal calling, that being that the animal named correctly in the previous round cannot be called out in the current round, even if it would otherwise be correct. If two or more players yell an animal's name correctly at the same time, they all score. (The largest correct animal is the one that players cannot name in the subsequent round.)

If you score, you either:

Safe for what, you may ask? If you call out an animal incorrectly, you must discard all face-up cards in front of you; if you have no face-up cards, then you must turn one safe card (if you have any) face up to put it at risk again.

Once the face-down card in the deck appears, you split this deck to create a third face-up pile, increasing the difficulty of the game. Once all the cards have been claimed, the game ends and the player with the most cards wins.