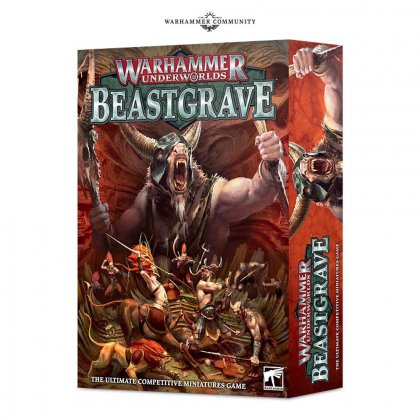 Amidst the stygian terrors of Beastgrave, those who are not predators are prey!&#10;&#10;Warhammer Underworlds: Beastgrave is a game of strategy, fast-paced combat and devious ploys for two to four players. Each player takes their warband of Citadel Miniatures and pits them against their rivals on the hidden battlefields of the Mortal Realms.&#10;&#10;In Warhammer Underworlds, you and your opponent pick a warband &ndash; 2 are included in this box (Skaeth's Wild Hunt and Grashrak's Despoilers) &ndash; and build a deck of power and objective cards. After placing your warband on the hex-tiled game boards, you take turns making actions &ndash; movement and attacks &ndash; until 3 rounds are played. Between actions, you can use your power cards to introduce effects and reactions that can swing the battle in your favour; building the best deck you can and using cunning to deploy these abilities at the perfect time is the secret to mastering the game and dominating your foe. Merely vanquishing your opponent&rsquo;s warband does not guarantee victory &ndash; capturing objectives, standing your ground, making the best tactical choices and deploying the right cards at the right time will gain you the glory points you need to win!&#10;&#10;Everything you and a friend need to play games of Warhammer Underworlds is included in this box, and once you&rsquo;re familiar with the rules, games will take around 30 minutes &ndash; meaning you&rsquo;ll always have time for a rematch.&#10;&#10;-description from publisher&#10;&#10;