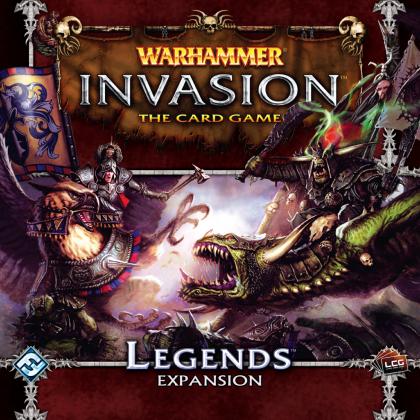 Rising up from among the countless inhabitants of the Old World, there are those who are selected by fate to serve as its harbingers. Some are champions, battling against the ever-encroaching influence of Chaos, while others become agents of darkness, reveling in the favor of Ruinous Powers. But for good or ill, the winds of fate grant these influential figures the means to alter the Old World for generations to come, and in doing so, to become legends.

The Legends Expansion is the latest deluxe expansion for Warhammer: Invasion The Card Game, and it brings the power and influence the Old World's greatest figures to your deck. With 165 cards (3 copies each of 55 cards) consisting of new options for players of all factions, the Legends Expansion delivers compelling new mechanics and deck-building options that will bring your Warhammer: Invasion game to new levels of immersion and strategy.

Chief among the gameplay innovations introduced by the Legends Expansion is the inclusion of a new card type: Legend. A Legend card represents one of a faction's most influential heroes, leaders, and villains; the placement of such of card in your play area affects every zone you control, as it lends its individual strengths to your forces as a whole. For new and casual players, Legend cards present an exciting additional layer of strategy. For veteran players, these powerful cards are the keystones around which entire decks can be built.

Placed in the center of your capital board, Legend cards lend their power to all three of your zones, along with certain other benefits as described by their text. Your kingdom will prosper under the strong guidance of Thorgrim Grudgebearer, Karl Franz, Malekith, and many more. But can you protect these legendary figures from enemy attacks long enough to benefit from their presence?