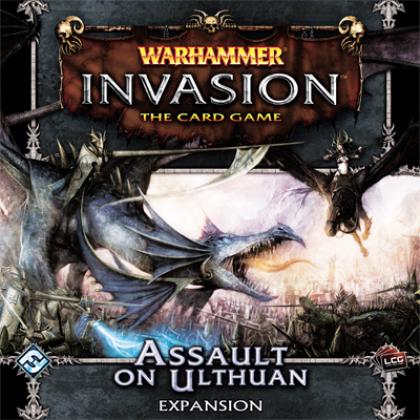 This deluxe expansion brings two new factions to the forefront of the war for the Old World.

The Assault on Ulthuan expansion explores the bitter enmity between the Dark Elves and the High Elves. The Dark Elves are a cruel race who excel at taking prisoners, sacrificing them, and inflicting vast amounts of pain on enemy units through hit point reduction. This treacherous faction seeks to enslave the other races of the Warhammer world. The High Elves are a proud, powerful race who rely on card denial, cancellation, healing, and ranged attacks. They work to heal damage to the world and unlock the ancient mysteries of the arcane. Both will raise mighty kingdoms and venture out on perilous quests as they seek the power to stand victorious. Can either faction rise to dominance over the other, or will they both succumb to another foe altogether?

Assault on Ulthuan contains two core starter decks of forty cards, as well as two capital boards for the Dark Elves and High Elves. Players of the existing factions will find plenty to aid them as well; new cards for the other four factions, plus a handful of neutrals, bring a host of new strategies, tactics, and deck-building options for each of the six races in the game.

The war for supremacy over the Old World has already seen bloodshed and suffering beyond imagination... but this was only the beginning. This spring, two new forces join the invasion!