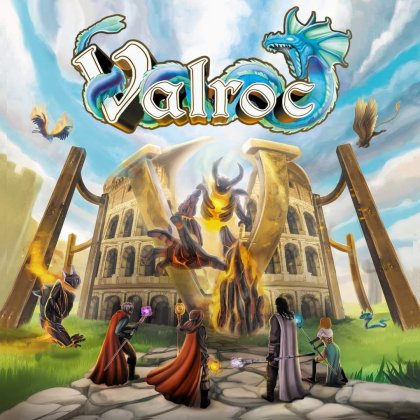 Welcome to Valroc, the famous city of wizards. You are one of them competing in a great tournament to acquire the Archmage title. With the help of your assistant, earn skill points in each of the 4 elements (Fire, Water, Earth and Air) and enter the arena to tame and chase the most dangerous creatures from the land. Will you take risks in fighting mythical creatures, use black magic or rely on your own knowledge to achieve this actions? Train yourself, attend magical lessons and make offerings to the gods&hellip; As many possible strategies as imaginable but only yours will lead you to victory!&#10;&#10;In Valroc, you play wizards in competition to acquire the Archmage title. For that, you will have to defeat terrible creatures (or tame them). The first player who has defeated or tamed six creatures ends the game. The winner is the player with the most Prestige Points.&#10;&#10;The game is split into two different phases :&#10;&bull; The first one is a draft phase in which the players must select the creatures they will have to fight. Thereby they will prepare their tournament as well as possible.&#10;&bull; The second phase is the tournament in which the players will fight against each other by a worker placement mechanism.&#10;&#10;