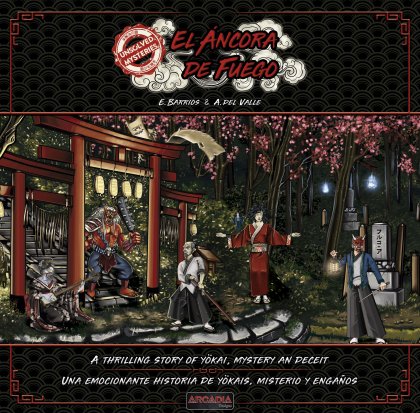 Unsolved Mysteries: El Ancora de Fuego is an adventure, survival, mistery and terror game for 1 or 2 players that takes place in Japan in 1902.&#10;&#10;It's 2018. William Carter is a Brooklyn detective who reopens and investigates unsolved cases, whose evidence was sinister and inconclusive or potentially supernatural. In his current case several mental patients escaped from an asylum and subsequently disappeared without a trace. Everything becomes darker as the investigation goes deeper and he finds evidence that the Y&ouml;kai, demonic spirits and shadows, live amongst us. The players will be the protagonists of Carter's 1902 unsolved case and will join him on his journey through the darkness to discover the truth.&#10;&#10;All the decisions made throughout the adventure will influence the development and the end of it. The game is designed to be played several times, since in a single game you can&rsquo;t discover all its content. The players will choose two characters at the beggining from the three initials, being the story different according to who they play it with and unlocking other characters as the story goes on.&#10;&#10;Each chapter of Unsolved Mysteries: El Ancora de Fuego is played on a board, using cards to represent places, interactions, objects and Y&ouml;kai, and six special dices whose result when thrown will determine the possible options to be made, each of them will be read in the adventure book. During their turn, players can explore and interact with their surroundings, move to other locations, use objects and defend themselves or flee from the Y&ouml;kai that will appear. Players should keep in mind their mental state, because the darkness lurks and they may fall into a nightmarish state in which their true personality is revealed. And when death comes, they can use the scarce Destiny Markers to avoid it ... temporarily.&#10;&#10;The story goes through several chapters, some of them optional and secret, more than five endings, more than 300 different interactions and more than 50 different proofs to find.&#10;&#10;Come and confront your fears in Unsolved Mysteries: El Ancora de Fuego!&#10;&#10;&mdash;description from the publisher&#10;&#10;