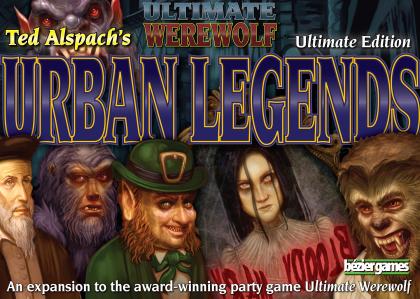 We've all heard the stories: A giant furry beast roaming the hills, a mother bent on revenge for her unjust death, a mischievous taunting elf-like creature – but that's all they are, just legends...right?

Ultimate Werewolf: Urban Legends brings these characters to life within Ultimate Werewolf. If Bloody Mary dies, she starts killing the players who killed her...from the grave. The ferocious Chupacabra loves the taste of werewolf, but if he runs out of them, villagers will do. The Wolf Man hunts with the werewolves, but to the Seer he appears as an innocent villager. The tricky Leprechaun sides with the village, messing with the werewolves by changing their nighttime target. All Sasquatch ever wanted to do was to help the village kill werewolves...but if the village wavers on this, Sasquatch will turn on them. And finally, Nostradamus has to make a name for himself by predicting who will win each game of Ultimate Werewolf – and then helps out his prediction. All or some of these characters can be added to your Ultimate Werewolf games to make them even more compelling than before!

Urban Legends is included in the 2013 edition of Ultimate Werewolf, is compatible with earlier editions of this game, and is also available on its own.