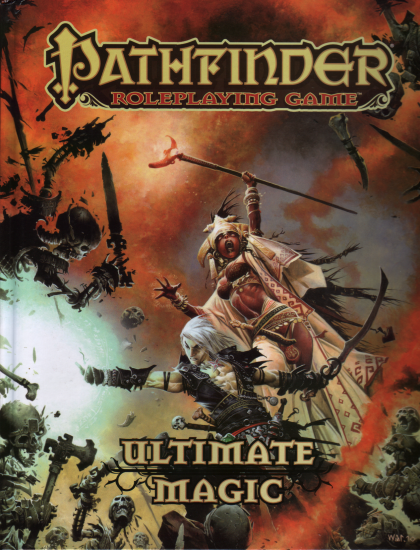 Unlock the magical mysteries of the Pathfinder RPG with this exhaustive guide to the art of magic, an invaluable resource for players and Game Masters alike!

This comprehensive 256-page hardcover reference unveils the magical secrets of the Pathfinder rules like never before. Tons of new tricks and techniques for every spellcasting class in the game fill the book, ranging from arcane secrets uncovered by studious wizards to dazzling ki-tricks performed by canny monks to new mutagens for alchemists, new oracle mysteries, specialized channel energy options for clerics, and more.

Ultimate Magic also introduces the latest Pathfinder RPG base class: the magus. Combining arcane spells with practiced martial skill, the magus incorporates elements of the warrior and wizard to walk a path balanced between two deadly efficient extremes. All this plus more than 100 new spells for all spellcasting classes, an innovative new “words of power” spellcasting system, a complete system for 1-on-1 spell duels, and more.