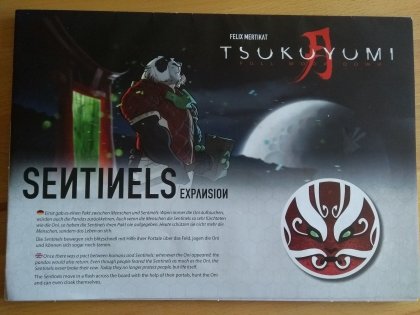 It is their holy quest to save earth from the Oni. They are mystic warriors, arising from the Jade Kingdom, a realm in which all surviving otherworldly creatures found shelter, after humans began killing and hunting them. The Sentinels still protect the earth whenever Oni walk it. So they return through their jade portals. Possessed with the magic of ancient times, like the Kami had, they can hide in plain sight. Their jade armor hides them, when a mortal is looking at them.&#10;&#10;As Oni appeared in several times during earth's history, the Sentinels adapted to these times. Although they are ancient warriors, some use modern technology while others stay traditional. But in the end, they are here to save the earth - but not the humans anymore. They walk between both worlds, the protectors of two realms.&#10;&#10;Playstyle:&#10;&#10;The Sentinels are the first game changer faction for Tsukuyumi. They modify the game dramatically, as they have a special winning condition: If there are no more Oni on the board, they immediately win - both, if they killed the last Oni or any other player did. In this case, no score points are counted. If they are not able to kill all Oni before the end of the game, they are awarded score points for killing Oni units.&#10;&#10;Instead of placing a homezone, they place six portal markers next to which they are allowed to place new units. Sentinel units are even allowed to move from one area with a portal to another of its kind for only one movement point.&#10;&#10;Any unit has at least one exact copy in play, representing its camouflage. Both standees can be moved separately and are treated as real. Only in battle, the player has to decide which of both standees is the real unit.&#10;&#10;