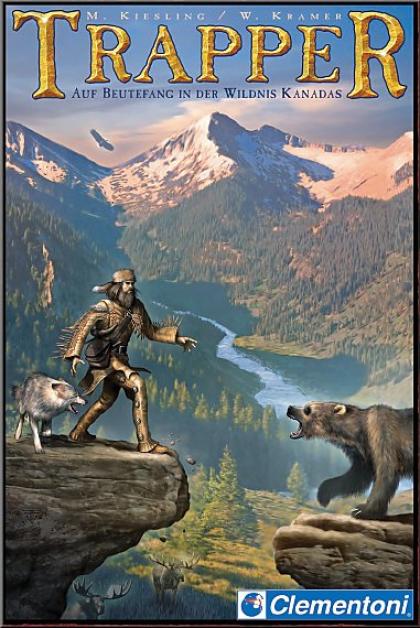 From the designer, translation courtesy of BoardgameNews.com:

Trapper is an adventurous family game for 2-4 trappers from 10 years old, in which players gather tiles lying on the table. Trapper is suited especially well for two players.

Players are trappers in the Canadian wilderness, catching wild animals in the forests and lakes and searching for fungus and herbs. You ship your prey in canoes. As soon as one of your canoes is full, you sell the goods at the market. Both in the gathering of your prey and in the filling of your canoes, you need clever plans and foresight. Who will make the most valuable captures? The winner is the player who possesses the most money.

The game offers two different versions: A basic version in which luck plays a larger share and a somewhat more demanding version for tactically-minded players.

The basic game of Trapper is a simple game in the style of Verflixxt and Celtica that's suitable for a wide target audience. Good luck and tactics are about equal on the scales.

The somewhat more demanding version offers more tactical possibilities. How should one advance with the animal gathering? Which is more lucrative, getting a few larger and very valuable canoes or bringing many small canoes with different species to the market? Both strategies can lead to success.