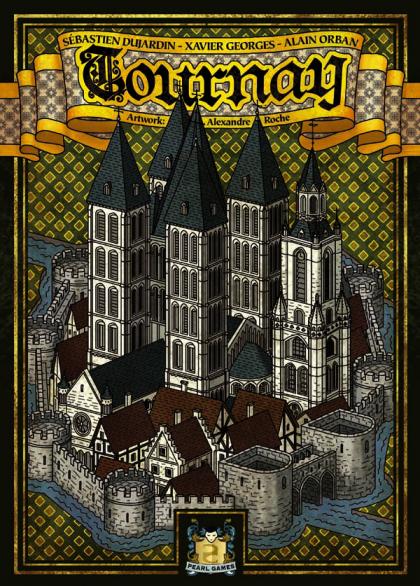 Built by the Romans during the first century in Belgian Gaul, Tournay experienced most of its growth along the Scheldt river. Unfortunately, the river also contributed to its troubles, because in 881, the Normans traversed its watery path, and thereby easily captured the city. That act of aggression stunted Tournay's prosperity. This game invites you to participate in the reconstruction of the city, in order to establish a glorious era that will last for more than seven centuries. Help your district flourish by cleverly coordinating the work of the city's three domains: military, religious, and civil. Certainly the prestige of your buildings will brighten the entire city!

Tournay is a card game from the same designing team as the 2010 release Troyes with artwork once again by Alexandre Roche. In this game, players manage a district of the city and its three classes of citizens. The cards are classified by level (I to III) and color to form nine distinct decks. Players initially have two citizens in each class that they will use each turn to carry out one of five available actions, such as drawing cards, or using the powers of their buildings.

In each player's district, the building cards save them money, make more efficient use of the decks of cards, or recruit new citizens. The character cards optimize the use of buildings if properly positioned. It's up to you to create the most effective card combinations. Finally, constructed prestige buildings will give you valuable prestige points, depending on how your district has developed. But beware: Your opponents will also benefit from every prestige building you build!

Note that an expansion is included in the base game's box, so advanced players can add still more replay value to this dynamic game!

First, you may play a card from hand to your display (3x3 grid) by paying the appropriate cost (some combination of coins, meeples, cards, etc). You may play a card on top of another of the same color; if played on top of a different color, discard the older card.
Then take one action:
Draw a card; move 1-3 meeples off the Plaza to draw a level I-III card; you may pay others 2 coins to use their worker(s). If you draw the event card of that deck, place a coin on each event card, then trigger all event cards once per coin.
Activate a building card by moving a meeple from your Plaza to the building card (max 1 Meeple/building); cards do a variety of things like give you coins, recruit an additional meeple, use someone else's card, etc.
Combat an event by paying the cost (usually 1 Meeple, 1 coin, +1/coin on the card; or, 2 meeples) shown; take the card as a reward. Later, when events trigger, you may play this from hand to prevent an event from affecting you.
Reactivate all workers: return all meeples to your Plaza, and remove all markers from building cards.

The game ends at the start of the Start Player's turn if 2+ players have all 9 cards in their display; OR if only 1 player has, but at least n-1 Town Crier cards have been revealed. Everyone then gets to play one final card (paying normal costs). Earn VPs for all cards in display, and for all Event cards you've combated. Most VP wins!