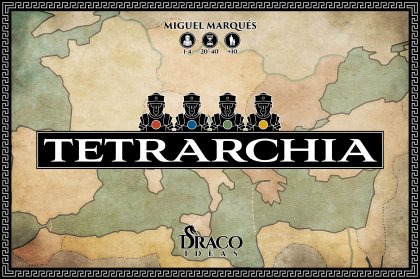 By the end of the III century the Roman Empire is doomed. Enemies surround the borders, instability spreads over the provinces, and whenever a Roman Emperor fights a threat, usurpers take his place in Rome. The Emperor Diocletian only sees one revolutionary way out: share the power with Maximian, Constantius and Galerius, forming the first 'Tetrarchy'. Now their enemies are doomed...&#10;&#10;TETRARCHIA (&quot;rule of four&quot; in Latin) is a cooperative game in which 1 to 4 players take the role of the 4 Emperors, fighting the revolts within the Empire and the Barbarian armies that try to bring it down. With easy rules, the core engine leads to very different games full of interesting choices, with up to 81 difficulty levels. The Draco Ideas edition also includes:&#10;&#10;- The Dux expansion, now with 4 independent modules (Dux, Vicarius, Pirates and Goths).&#10;- Plus 6 independent variants, including a new competitive one (Barbaria) that holds up to 5 players.&#10;- Plus 4 updated historical scenarios (Carausian revolt, Danubian Wars, Mauretanian War and Great Persian War).&#10;&#10;The combinations are countless! The flow of each Emperor's turn is very simple: spend up to 6 'Imperivm Points' (to Move, Sail, Secure, Subdue or Attack), and then propagate threats with the roll of two dice. The players win if they secure the borders of the Empire before the majority of provinces revolt or Rome falls.&#10;&#10;